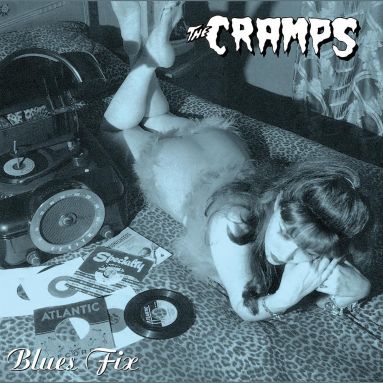 The Cramps’ “Blues Fix” first came out in 1992 as a side project to “Look Mom No Head!” – sort of the single from the album, plus three. It came out then on newfangled CD, so here’s your chance to get a vinyl fix of the “Blues Fix”, all big 10 inches of it.

So what you got here big boy? Well, first up is ‘Hard Workin’ Man’, originally released on MCA Records in 1978 as part of Jack Nitzsche’s soundtrack to Blue Collar, which had Harvey Keitel playing alongside Richard Pryor. The record featured Ry Cooder on slide guitar and Captain Beefheart growled a mean vocal. Jack was a good friend of Ivy and Lux, with a shared passion for records. This has to be the latest original they covered on record.

It was the Cramps who introduced me to the delights of Lightning Slim’s ‘It’s Mighty Crazy’, originally issued on Excello 2131 in November 1957, if you must know. Of course you must, as like the rest of us record freaks you just keep on rubbing at that same old stuff: catalogue numbers, matrix numbers, dates, the colour of the label, the thickness of the wax, even what’s inside the groove. A svelte take here from our band.

Walter Brown got his Jelly Roll rocks off on Zip 4686 in 1958 and is definitely not to be confused with the blues shouter of the same name who fronted the Jay McShann Orchestra. Our Walter made this singular outing in his search for fame and poverty and put a lot of energy into both sides of his 45. This tune is the more insistent, and the Cramps do that restless-breathless-energetic thing so well on their take.

The EP closes with ‘Shombalor’, originally issued by Sheriff & the Ravels on Vee-Jay 306 in December 1958, just in time for Christmas. Sheesh, who buys their loved one this to play under the mistletoe? (You’ve guessed.) The record was produced by Aki Aleong, who might have also owned up to writing “Of all the animals in the world, I’d rather be a bear”. But then again, as Sheriff sings it with such panache and conviction, maybe they are his finely tuned lyrics. Whatever, Lux eats the song like only Lux could eat a song.