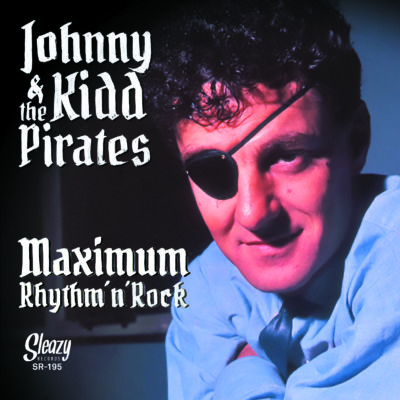 SR195-9 – Part 4 – The Rhythm & Blues Sides
Side A:
Don’t Make The Same Mistake I Did / Send Me That Girl
(1st version, original take without orchestra overdubs)
Side B:
It’s Got To Be You / I Hate Gettin’ Up In The Moring (1st version)

During summer 1986 I was searching for records in a flea market and suddenly I was stunned by a cover. It was titled The Best of Johnny Kidd and the Pirates and the image was a guy with an eye patch surrounded by riggings and ropes. At that time, I didn’t know that Johnny Kid died 20 years before in a car accident, neither did I know what I was going to find in those grooves, being sixteen I only knew Johnny through books and magazine mentions and some versions of his songs that arrived at my ears but never before had I listen his way of understanding rock’n’roll.
Cliff Richard was the maximum exponent of rock’n’roll in UK at that time and most singers tried to emulate him, Johnny Kidd & The Pirates’ music had an aspect that located it in an opposite road. Johnny composed his songs, and this supplied his repertoire with an unusual personality, this can be realized in songs such as PLEASE DON’T TOUCH, SHAKIN’ ALL OVER or PLEASE DON’T BRING ME DOWN, but there is also a big influence of rhythm & blues in his way of composing and this influence increased as time went by. Johnny Kidd & The Pirates carried out big changes to the rock’n’roll produced in UK, setting the base for mersey-beat and the foundation of what would become the 70’s pub-rock.
This box set compiles in 10 x 7” records both ways, including four Eps dedicated to Johnny’s rock´n´roll sides and four more about his rhyhthm & blues’ ones, plus two singles from his band The Pirates, one of them including two songs never released on vinyl before, and the other one reproduces their ’64 single but in stereo instead the original mono.
Every EP has extensive notes about the recording sessions and the whole artwork is really brilliant. A true delicatessen for every rock´n´roll fan and record collector.
DeeJay Francho 2019.