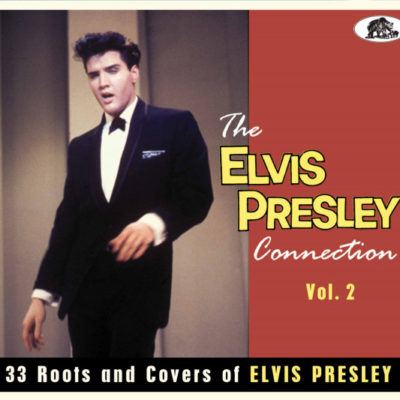 • A unique collection of originals and rare cover versions of famous Elvis tunes.
• This second volume continues exactly where volume one ended. It puts the spotlight on songs that Elvis had recorded in-between 1958 and 1962.
• Did you know that the famous girl group The Marvelettes covered Elvis and what famous Hollywood actor Anthony Perkins has in common with Elvis Presley?
• More rare recordings are included here, many of them for the first time on CD!
• We have two Don Robertson demos made exclusively for Elvis Presley and two of Elvis’ colleagues in Memphis, Carl Mann and Thomas Wayne are as well included as the famous answer songs to Little Sister and Just Tell Her Jim Said Hello by LaVern Baker and Gerri Granger.
• The compilation also presents rare British Rock ‘n’ Rollers with their versions of Elvis-songs, including some hard-to-cover ballads.
• We have of course some originals that Elvis influenced. Especially The Blackwood Brothers in Elvis’ favorite gospel field and the rare original of Shoppin’ Around by Joel Grey!
• Australian rockers, Johnny Devlin and Bryan Davies, are included with their hard-to-find versions of A Big Hunk O’ Love and Slicin’ Sand.
• Crooners, rockers, R&B acts, all influenced by Elvis Presley, plus songs that Elvis influenced himself while he was working extensively on his career as a Hollywood actor.
• The fine booklet includes rare photos and memorabilia plus liner notes by the German Elvis Presley expert Helmut Radermacher.