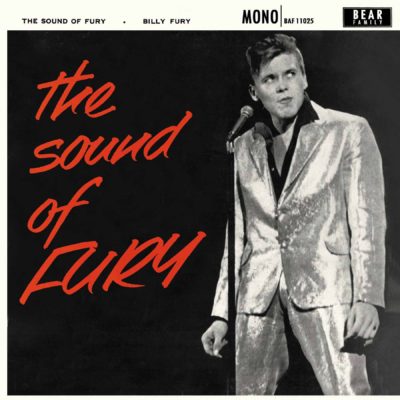 The Sound Of Fury

• The first album from Billy Fury, ‘The Sound Of Fury’, originally released in 1960 on the Decca label.
• It was produced by Jack Good.
• The new edition of Bear Family reproduces the original pressing and cover from Great Britain.
• The ‘Sound Of Fury’ is and remains for many music lovers the best British Rock ‘n’ Roll album ever!
• Keith Richards said in 1971 about ‘The Sound Of Fury’: « One fantastic album. Songs he’d written, like people do now, he got some people he knew to play together and did it. »
• Additionally, there are two bonus tracks in Wondrous Place and Gonna Type A Letter.
• Limited edition of 500 copies on colored vinyl. Autograph card enclosed.

Billy Fury’s real name was Ronald Wycherley (1940 – 1983). The British singer had a short and intense career from the late fifties to the mid-sixties. Before and after that he made a name for himself as a songwriter. In his home country he enjoyed great popularity, not least because of his films and early rock ‘n’ roll releases.

The ‘Sound Of Fury’ was his first album, recorded and released in 1960. Fury wrote all the songs himself, unusual for a young musician in the UK of those days. The album made it into the top 20 of the UK album charts and is still considered one of the most important albums of British rock ‘n’ roll.
The new release in Bear Family’s exclusive series of 10inch releases comes with the original cover and two bonus tracks. The edition is strictly limited to 500 copies and is pressed on colored vinyl.